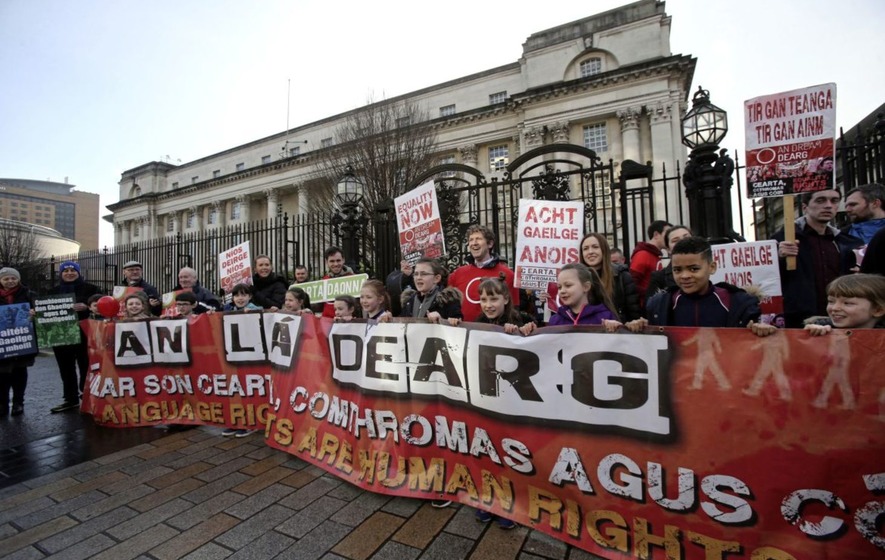 Conradh na Gaeilge has issued the Executive with a pre-action protocol letter (PALP) concerning the ongoing failure to adopt an Irish language strategy.

On the 3rd March 2017 Justice Maguire gave a declaration in the High Court stating the Executive had failed to fulfil their duty to adopt an Irish language strategy as set out in Section 28D of the NI Act 1998. This ruling came as a result of a Judicial Review taken by Conradh na Gaeilge. The Irish language Strategy was promised as part of the 2006 St Andrew’s Agreement, which made amendments inserting Section 28D into the NI Act 1998, and was also promised as part of the Executive’s Programme for Government 2011-2015. Conradh na Gaeilge has now informed the Executive of its intent to return to the High-Court on this outstanding matter.

The Irish language Strategy was also promised again as part of the 2020 New Decade New Approach Agreement, and the Strategy was to be brought forward within 6 months of the Agreement. In addition to this, the New Decade New Approach deal also committed the parties (at 4.6.3) to publish within 3 months a comprehensive timetable for development and delivery of the Irish Language Strategy. 14 months have now passed and neither the Strategy nor the timetable for developing a Strategy, have been progressed by the Executive. In the meantime, a series of other Strategies have been progressed, their timetables published, and their delivery mechanisms implemented, with the support of the Executive.

“It is hard to believe that four years on from a historic High-Court ruling declaring the Executive had failed to fulfill its duties regarding the Irish language strategy that we are now planning on returning to the Courts due to non-compliance. This Strategy was written into the law 15 years ago. In 2017 Justice Maguire gave a resounding ruling declaring a failure on the part of the Executive regarding the adoption of this Strategy. On top of that, we are now also more than 14 months on from the New Decade New Approach Agreement, that recommitted parties to this Strategy, and time-bound them to produce a timetable for development within 3 months, alongside the Strategy itself within 6 months. Conradh na Gaeilge would prefer not to take legal action, but the inability of the Executive to adopt a Strategy leaves them at odds with their legal obligations and leaves us with little other choice. The Irish language community cannot be expected to wait any longer on the implementation of commitments made 15 years ago.”

“Not only has there not been an Irish language Strategy adopted as required by law, but the Executive have not even been able to sign off on a timetable for developing that Strategy, something they achieved back in September for a suite of other strategies. We understand there have been efforts to ensure the Irish language Strategy has been part of the Executive’s agenda, but that those efforts have been in vain, meaning that 14 months on from New Decade New Approach the Executive cannot agree to even discuss a timetable for such a strategy, nevermind the strategy itself. This constant delay represents an ongoing failure to fulfill those legal duties under Section 28D of the Good Friday Legislation, alongside a failure to implement the St Andrew’s Agreement, to adhere to the 2017 High-Court Ruling, and is also a failure to adopt the most recent Council of Europe Recommendations on the European Charter on Regional and Minority languages which, in July 2020, called on the British Government to “adopt a comprehensive law and strategy on the promotion of Irish”.

“We have today issued the Executive with a pre-action protocol letter on behalf of Conradh na Gaeilge, regarding the continuing failure of the Executive to implement an Irish language strategy in accordance with Section 28d of the Northern Ireland Act. In 2017 the High Court made a court declaration in favour of Conradh na Gaeilge that the Executive's failure to implement an Irish Language strategy was a breach of that Section 28d duty.  Four years on from that ruling and an Irish Language Strategy has still not been implemented".

Full details of the 2017 case and other references to this issue can be accessed below: