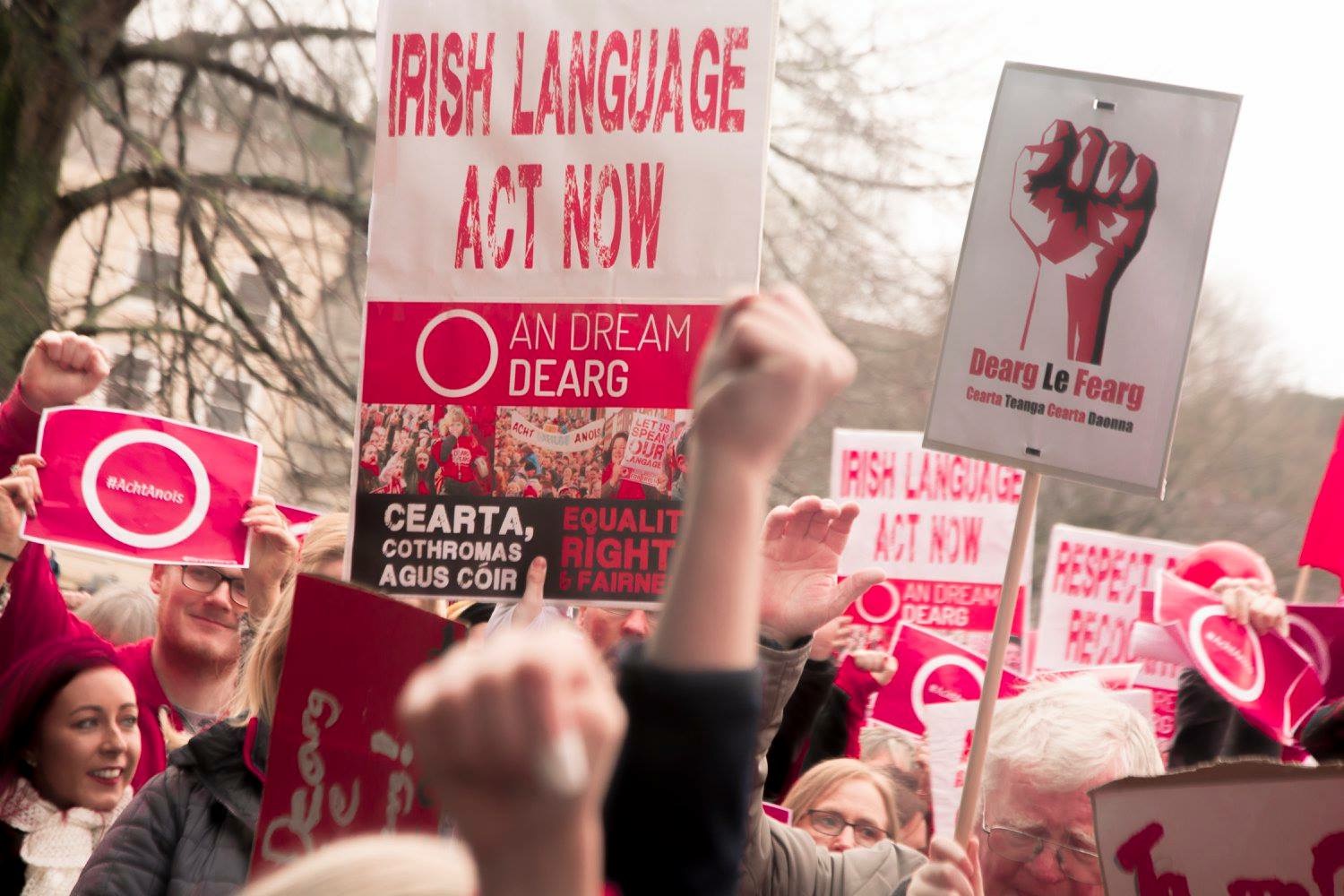 On the 25th of May 2022, the British Government announced that they would be introducing the Irish language legislation that was promised under the January 2020 New Decade, New Approach agreement through Westminster. All elements of the initial New Decade, New Approach legislation which pertained to the Irish language were to be implemented within 100 days. This did not happen.

Following this missed deadline, over a year later, former Secretary of State, Brandon Lewis, announced in June 2021 that he would legislate for the Irish language in Westminster in October 2021 if the Executive failed to do so before the end of September 2021. Both deadlines passed and still no legislation was enacted.

The British Government’s announcement in May 2022 was a significant milestone in the ongoing campaign for language rights; for the first time, the Irish language would be officially recognised and exist in law. Since it’s introduction, the bill has passed through the House of Lords, undergoing the First Reading, Second Reading, Committee Stage, Report Stage and Third Reading. Throughout each of these stages, Conradh na Gaeilge have been working in conjunction with representatives from the House of Lords in tabling amendments which would strengthen the bill.

The bill will be passing through the House of Commons following the summer recess where we will continue to work with political representatives in tabling amendments to ensure that this legislation is as strong as possible. All information relating to the bill, including the stages and amendments, can be accessed here.

Language Rights Handbook - The Road Ahead - 2022

In the New Decade, New Approach era, we published a handbook which aims to empower and inform the community with regards to their new rights upon the enactment of the incoming Irish language legislation. The handbook describes;

We want this handbook to function as a learning tool for the community so they can be confident and informed in the pursuit of their rights. You can access the handbook here.

Background
St Andrew's Agreement was signed in October 2006. As part of the agreement, the British government promised to enact an Irish-language act for the north in Westminister if it did not come about through the Assembly.

But Irish speakers in the north are still waiting for legislation to protect their language rights.

We want an Irish-Language Act NOW!

Discussion Document
We recently published a

discussion document detailing the potential proposed costs associated with the introduction of an Irish-Language Act. This document includes a breakdown of the different sections that would be involved in an Irish language Act, with an explanation of these sections, and particular proposals that are workable to implement them.

11 sections are proposed as part of an Irish-Language Act, including provisions which concern:

Costs for the different sections can be surmised in two parts:

The total cost over the initial 5 years would be £19million = equivalent of £3.8million per year over a 5-year lifespan of an Executive.

Furthermore, these proposals represent an investment in the economy and for the people of the North in general. It is estimated that there would be an additional income of £8 million generated for the economy if the BBC fully fulfilled its obligations to Irish-language programming.

Crossparty & Community Support
Five parties and a majority 50 of the 90 newly-elected MLAs already support protective legislation for the Irish-language in the form of an Act.

Over 94% of the submissions received for the DCAL consultation on a draft Irish-language Bill were in support of an Irish-Language Act in the north. Moreover, over 12,000 people took to the streets of Belfast calling for an Irish-Language Act at An Lá Dearg organised by the campaign An Dream Dearg on 20 May 2017.

We are calling on the parties now to come together and support these proposals, and to implement Irish-language legislation, as recently recommended by both the Council of Europe and the United Nations, and as was promised over ten years ago in the St Andrew’s Agreement. 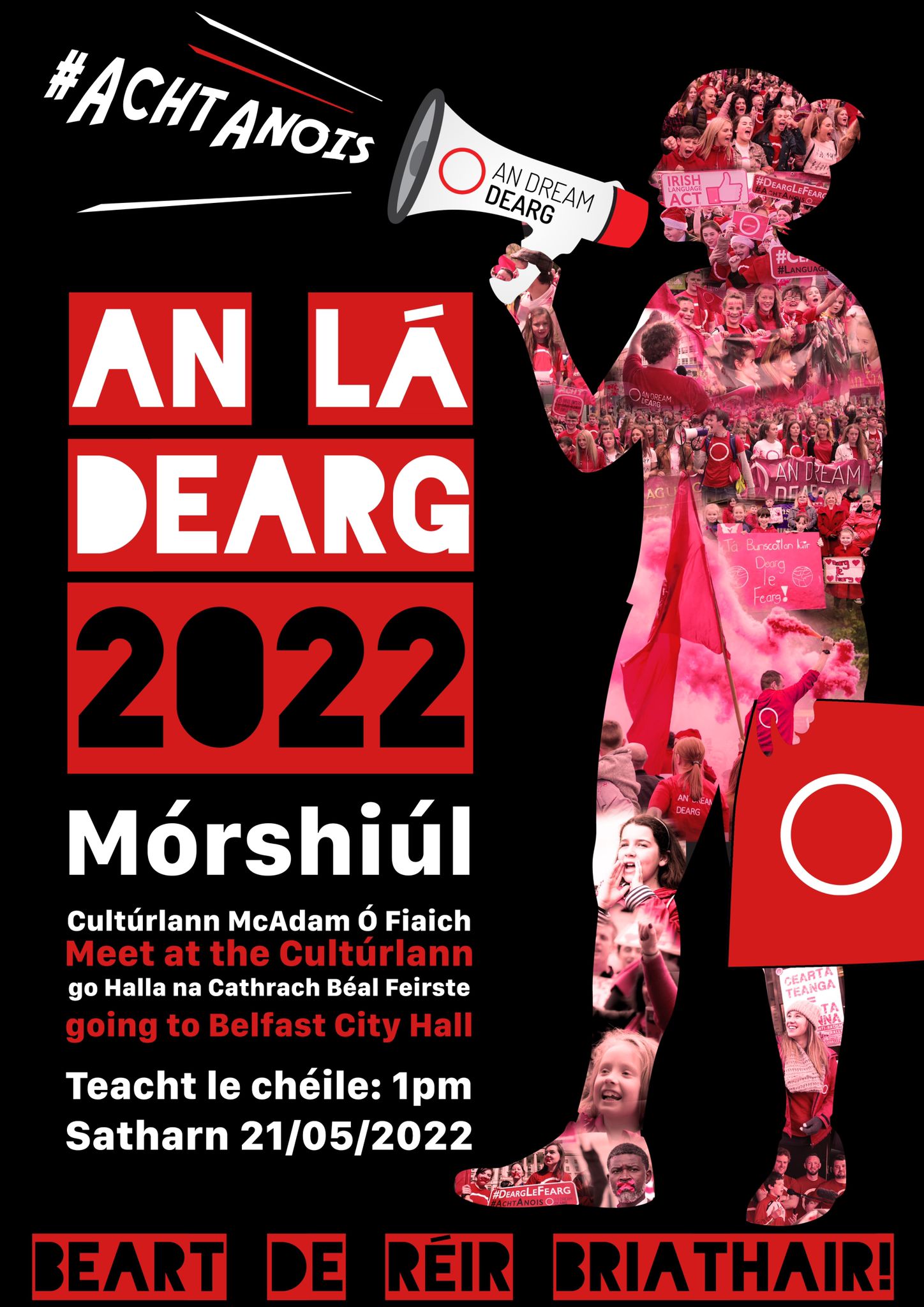